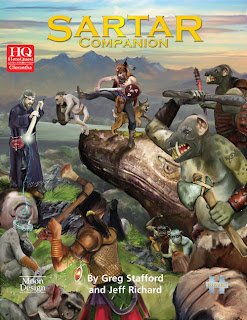 The Sartar Companion is the follow up to Kingdom of Heroes for HeroQuest 2. The book has the same format as the earlier volume, weighing in at 296 pages, for a rather steep €40 price tag. Still, given the size of the book, and the volume of material in it, that doesn't seem an unreasonable price, and the alternative would presumably have been two books at rather more than half the price each - economies of scale being what they are. The book also includes a couple of full page, full-colour maps, one of the whole Dragon Pass area, and the other of the Colymar lands.

One negative point is that the proofreading does not appear to have been done to a very high standard, with a number of jarring typos throughout the book. Having said that, its not as bad as it was in the early Hero Wars books, or some of the Mongoose books, for that matter. I've seen much, much, worse in other published RPG products, but that doesn't mean there isn't room for improvement. Perhaps the instance most in need of an erratum or clarification is the description of the walls of Runegate, which manages to contradict itself within the course of a single paragraph! Other than that one example, however, the intended meanings are usually clear.

The contents of the book are something of a random assortment, which is only to be expected in a "Companion" volume. That is, the book includes all the bits they couldn't squeeze into the already large Kingdom of Heroes. In a similar vein, as the title implies, the book is of little use if you don't own the previous one. Unlike KoH, though, virtually everything in this is GM-only information, with only the 40 or so pages dedicated to cults being of much use to players. Character generation and general background were, after all, fairly well covered in KoH.

Broadly speaking, the book can be divided into four sections: background, encounters, scenarios, and cults.

The background section describes the city of Jonstown and the towns of Runegate and Clearwine, along with several other locations, such as the Old Wind Temple and the Starfire Ridges. Much of this is directly linked to the scenarios later in the book, and a few "For more information, see p. XX" tags might have been helpful as a result.  Some locations, such as Two-Face Hill, are therefore described into two different parts of the book, with neither making reference to the other. Having said that, everything in this section is stand-alone, and much of it serves as detailed background for gaming.

Places such as Jonstown are described in some considerable detail. Town plans in the style of those in the first book are included again, but here there is more emphasis on individual characters within the city, and the material is even more directly relevant to play. There are some oddities here and there, where NPCs are described as "very hard" to defeat in combat, or whatever - apparently regardless of who the player characters are. This is the sort of thing that makes perfect sense in a scenario, but putting such things into a background description that doesn't have a specific narrative feels rather odd. Of course, its easy to ignore, and is doubtless useful information for someone, so its a little unfair to actually complain about it.

The emphasis in the locations is fairly strongly on the Colymar clan and their local geography. For some reason, the Colymar have never particularly interested me, but given the scenario in the previous book, it does make sense to expand on them here. It can also provide useful ideas for anyone wanting to strike out with their own tribe, and gives groups the opportunity to feel that a particular corner of Sartar is more "theirs", without official publications contradicting it. And material on large and important places like Jonstown should be useful to everyone, regardless of their choice of tribe.

In addition to what is really some very good location writing, the background section of the book also includes a section on dragonewts, which is useful but adds little to what long-time fans already know, and a bumper section of 100 rumours in the old True/False/Mostly True/GM Choice/Meaningless format from the RuneQuest days. Nostalgia aside, a good GM can get a lot out of this section, and its a welcome addition.

The next major section focuses on encounters. There is an actual random encounter table, rolling percentile dice against the terrain type to generate possibilities, although, of course, its use is entirely optional. (As an aside, there is no explanation of what percentile dice actually are - since they are never used in the HQ2 rules, its apparently just taken for granted that you already know. On the other hand, one might well argue that that's not an unreasonable assumption for Glorantha players!) There is also a table showing the typical weather in Sartar throughout the year which, if you'll pardon the pun, should help set the atmosphere.

The book includes 42 typical encounters, and 31 special encounters. The typical encounters include things such as merchants, Lunar patrols, dwarves, and broos. Each has a description covering at least a page - it is, however, slightly confusing to discover that, for example, the page with "Encounter: 17b" at the top in large bold letters is not a variant of Encounter 17, but simply the second page of that encounter description.

Each encounter type also includes at least one specific group or NPC in detail, and, in a nice nod to the past, these include such familiar characters as Biturian Varosh. These help put a face to a general encounter such as "Sartarite Farmers", illustrating how they can actually be used in play. Many are detailed enough that they serve as plot hooks that could lead to short GM-written scenarios.


The special encounters are somewhat different. These are unusual events, such as odd meteorological phenomena, or finding mysterious ruins, as well as meetings with unique NPCs, such as the Puppeteer Troupe. Most of these are relatively briefly described, as strange bits of scenery one might come across, with some entries being as short as a single sentence, while others go into more detail. As a result, most aren't really plot hooks, but rather ways of showing off the unusual environment.

After the scenarios, the book concludes with write-ups of six cults not included in KoH. These include Heler, Eurmal, and Odayla, all of which were previously seen in Storm Tribe for Hero Wars; Argan Argar and Babeester Gor, who haven't been properly written up since RQ3 days; and Kolat, who has never had an official cult write up at all until now. Taken together with KoH, this is all of the regular deities of the Sartarites, although the Tarsh exiles also worship Maran Gor, who we've yet to see, and Yelmalio is popular in some places, too. The latter, though, belongs more properly in the Pavis book, which will be the next one in the series, so his absence here is entirely expected.

The cult write ups follow essentially the same format as in KoH, at least for the four relatively normal deities on the list. Eurmal, being a god of the occasional outcast nutter, doesn't quite follow the usual scheme, and the writers do a fairly good job of pointing out all the huge disadvantages of worshipping him. Playing an Eurmali is, as it should be, therefore something of a challenge, and they're much better suited to being sidekicks who can get the PCs into trouble rather than heroes in their own right.

Kolat is the first proper look we've had at a shamanic, spirit-based cult. The book expands on the information in the appendix to the HQ2 rules, as well as listing numerous types of spirit on which the Kolating can call. The write-up gives the impression that Kolatings are rather more limited in their magic than followers of theistic cults, with their abilities generally being narrower, as well as giving them what could be quite a complex series of taboos that they must not break. This may well be intentional, emphasising that the Heortlings are predominantly a theistic culture, with little room for strange spirit wranglers. On the other hand, a Kolating does have magic that's different from everyone else's (at least in an all-Heortling campaign), and that difference alone can be an advantage.

It's perhaps worth noting that Serdodosa, Kolat's female counterpart, gets no more than a passing mention. Doubtless there wasn't room for two spirit cults in the book - Kolat's is the longest cult write up here - but hopefully we will see her described properly at some point, along with Maran Gor, and perhaps some of the more obscure options.

In part 2, I will look at the scenarios included in the Sartar Companion.
Posted by JK Revell at 19:31