The majority of giant invertebrate monsters in the early editions of D&D are, at least in general terms, arthropods - the group of jointed-limbed creatures with chitinous exoskeletons to which insects, spiders, and crabs belong, among others. Exceptions include giant octopuses and giant squid, which are at least partially based on real animals, a few aberrations that are difficult to ally with anything real, and, somewhere in between, the purple worm. As originally drawn, the carrion crawler also qualifies, although this changes in later editions.

The worm-like body plan is a common one among real-world invertebrates, being found in a wide range of creatures that aren't all that closely related. But, on the whole, they aren't very fearsome, and the different types don't have the recognisability factor that spiders, scorpions, praying mantises, or whatever, might have. Even in D&D, the primary threat from the purple worm comes from the fact that it's just really big. The carrion crawler is a different matter, but, then it is rather less wormlike. Both creatures have 'Ronseal' style names, although, at least to my mind, 'carrion crawler' is, like 'mind flayer', one of the more evocative ones. 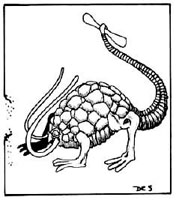 The rust monster is, like the bulette, a creature inspired by a cheap plastic toy bought in Hong Kong. The original toy apparently looked like a lobster with a propeller for a tail, perhaps to represent some weird aquatic kaiju. Gygax later admitted that he'd initially been stumped as to what special attack to give such a ridiculous-looking creature, but, of course, he eventually came up with something that made it a particularly memorable and unique monster. One that is essentially a walking hazard, an annoyance that's completely harmless by the usual standards of the game but nonetheless very much to be feared.

Albeit, like displacer beasts and piercers, one whose name is just a rather bland description of what it does. 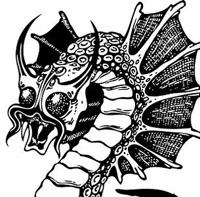 The remorhaz is another creature original to D&D, and one of the few such that is honoured with a proper name rather than a descriptive term. It's one of the more powerful creatures in the 1st edition that are described as simply animals, rather than intelligent beings. This is largely because it's so difficult to hurt, although it also has a bite that does more damage than that of most dragons. In later editions, it's toned down, although it remains quite fearsome.

As originally depicted in the 1E Monster Manual, the remorhaz has a snake-like body, with a thick leathery hide that's harder to penetrate than plate steel. The upper surface of the body is covered with an irregular array of white protuberances, which apparently shed excess heat from the intestines. The lower surface has a series of wide flat scales, which also resemble those seen on many snakes, reinforcing the resemblance. The key difference, of course, is that the remorhaz also has a huge number of legs. These are multi-jointed and covered with an exoskeleton; the segments within the leg are all of similar size, suggesting the relatively simple structure of a centipede's legs rather than those of a spider or insect.
Read more »
Posted by JK Revell at 22:16 No comments: 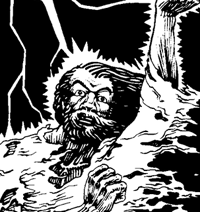 Cloud and storm giants are the most powerful of the standard races of giant in the D&D rules, the two final rungs on the ladder of increasing humanoid power. There doesn't seem to be any specific inspiration for them, although giants are sometimes associated with the sky in myths and legends. They are also the most intelligent, and the most inclined to be helpful, rather than hostile.

Cloud giants are 18 feet (5.5 metres) tall, with bluish skin, and, unlike other giants, have what appear to be blunt, but greatly enlarged, canine teeth in the upper jaw. They aren't shown or described as wearing armour, so their skin must be equivalent to plate steel to explain their stated armour value. Most are of regular human intelligence (which is still smarter than most of the smaller giants), but a few are slightly better, and have limited skills with magic. They are said to have a particularly keen sense of smell, which is likely a nod to the cloud-dwelling giant in Jack and the Beanstalk, although they are otherwise quite different. They are also the first giants tall enough to have a stride that enables them to walk faster than humans, although still less than one might expect, given that they're about six times taller than we are.
Read more »
Posted by JK Revell at 22:37 No comments: 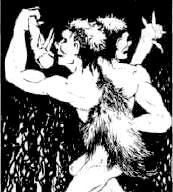 The word "giant" entered the English language in the Middle Ages, coming from the Latin and Greek gigas via Norman French. Prior to this time, the English word for what we would now call a giant was "ettin", which is related to the Norse jotunn. This older word fell out of favour, although it was used by both Lewis and Tolkien as the names for giant or troll inhabited regions in their fictional worlds: Ettinsmoor, north of Narnia, and the Ettenmoors, northeast of the Shire. (For that matter, Tolkein also used the alternative form of the word, "ent", as the name for a rather different race of gigantic beings).

In any event, "ettin" is simply another, and older, word for "giant". In D&D, however, it specifically refers to a kind of two-headed giant; this is original to the game, but has been adopted by some other writers and computer game designers since. 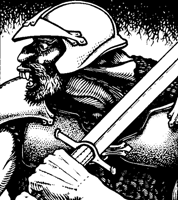 Both frost and fire giants, as portrayed in D&D, are loosely based on the jötunn of Norse myth. In the original myths, this was a rather vague term referring to a race of mostly (but not always) gigantic beings originally created by the primordial being Ymir. Ymir himself was certainly gigantic, since the sky is said to be the inside of his blue-coloured skull, and he was also described in the Prose Edda as "ice cold". Thus, while frost giants aren't a specific thing in Norse myth, it's clear where the idea comes from. Fire giants, apparently also descended from Ymir in the original myth, are the inhabitants of the fiery realm of Muspelheim, led by Surtur, whose primary function in the myths is to destroy the world at the conclusion of Ragnarok.

Both frost and fire giants appear in a range of fictional sources, of which perhaps the most obvious are the Mighty Thor comics. These predate D&D by over ten years, although it's likely that their appearance in the game is an independent creation from the same mythic origin, since they're quite clearly different from the comicbook versions. In D&D, they are the third and fourth rungs on the six-step ladder of increasing giant power and strength and are portrayed as more technologically advanced than the smaller hill and stone giants. 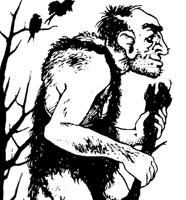 Giants are a recurring figure in myth and folklore, appearing in the stories of just about every real-world culture. There's something fundamental about the idea of people who look vaguely like us but are much larger and stronger. There is, of course, considerable variation among cultures as to what giants are supposed to be like, and even D&D reflects this by having six different core types, even before we get into one-mention specials or other creatures that are, in some sense, gigantic humanoids (such as ogres).

As is common where variants of the same idea for a monster exist in 1E, the six basic giants are arranged in a clear hierarchy of power, with each type having one extra hit dice, one extra point of strength, and delivering one extra die of damage than the one below it. Unlike some other creatures, while the details change, this progression of power remains the same in later editions.